Leslie Mackie Lied to Me

Sometimes recipes are bullshit. I think it's because the cooks either don't want you to really know their secrets or they want you to go out and buy their goods instead of making them yourself. Hrrummph.
Leslie Mackie is the owner of the Macrina Bakery in Seattle. It was one of my absolute favorite places to go. The item I absolutely loved in the bakery was the Squash Harvest Bread which I attempted to make from the recipe in her cookbook.
Here is the first instruction: Preheat oven to 375. Spread walnuts and pecans on a baking sheet, and pumpkin seeds on another baking sheet and toast for 15 minutes. Toast pumpkin seeds for another 5 minutes.
Does anyone know what happens when you do this? You burn everything. It becomes charred and the entire house stinks for hours. Fun. Of course I started this project in the first place because I was in a foul mood and needed to calm down. Didn't happen.
Damn you walnuts!! Why are you so expensive? Why did you ruin my day? And you pecans! How dare you!
The garbage can suffered a thrashing and did that little swirl dance where it nearly falls to the floor but was caught in time. My mother came into the kitchen at some point and started doing something behind me and I bumped into her a few times. She made the highly logical suggestion that I should have shaken the nuts on the baking sheet a few times while they were toasting. I responded, "Will you get out of my way please!?!"
I made a second attempt but no longer had the pecans or walnuts needed. Instead I toasted almond slivers and pumpkin seeds at 325 for 10 minutes and they had a nice smell and flavor afterward. It ended up being a big hit so I made another one for friends of my parents. It's always nice to be able to give something away that you know tastes good.
Next I tried Guatemalan Hot Chocolate Bread in her recipe book. 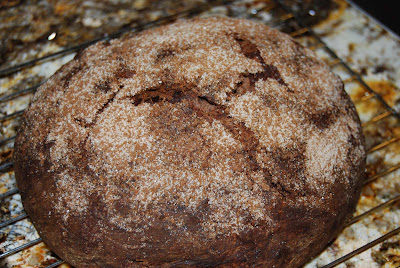 Grandma took one bite of this and said, "It needs whiskey. Or cognac maybe."

I like the way she thinks. Despite these almonds being nicely toasted, the bread lacked flavor overall and was quite dry. It needed cinnamon in the batter, not just on top and more moisture all around. In addition to the booze
Grandma decided that I should add oil and baking powder, neither of which was in the recipe. She is a big conspiracy theorist on recipes. She believes that no one should share recipes and that if someone gives you one then they left something out on purpose. I love to watch the food network but she hates it. She thinks that they are using fake food and they never taste anything they make.
I told her that I thought both of these recipes were pretty straight forward but didn't work right. She gave me the whole practice makes perfect speech and then told me a fabulous story.
After the war she was charged with all the cooking while her parents went to work. This meant that she had to cook for 9 people because she was the oldest girl. When her sisters got older of course everyone worked together. She even claims one of her sisters was the truly brilliant cook out of them all but I don't believe it. Anyway, her mother would often tell her to do things that she wasn't sure of how to make. She didn't want to disappoint anyone so she would try. The first time she made rice she thought that she had to stir it the whole time. She always stirred other things she made and didn't realize there was any difference in this. So she stirred and stirred and the rice turned blue. She had no idea what she did wrong and pretended it was fine. When her mom asked her what happened she simply said, "I made rice." 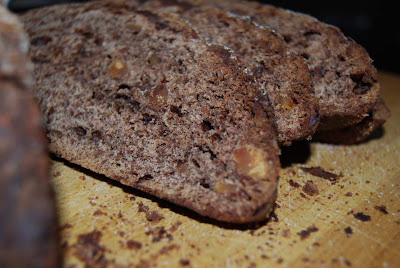 I made the best of this situation by lightly toasting the chocolate bread and adding some butter. I am happy that I made these attempts but I have to admit disappointment. When you read of something that sounds so utterly delectable like Guatemalan Hot Chocolate Bread, you really want it to be good. I believe that sneaky Leslie Mackie lied to me. I love her bakery so much that I guess I want to bring a little of it into my kitchen.
Do some things just taste better because you didn't have to make them? When you think of how often people go out for breakfast it's almost funny. Omelets and toast and hash browns, who can't make that well at home? Then again who doesn't like a lovely omelet brought to you while you sit and chat with friends.
I will try to make other things from this book, but I am more looking forward to going in for brunch.
Posted by Aviva O'Byrne at 10:45 PM