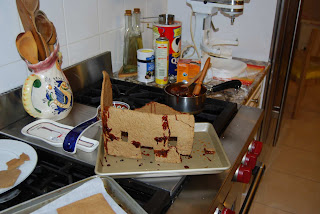 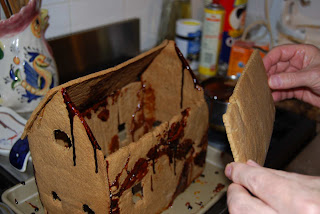 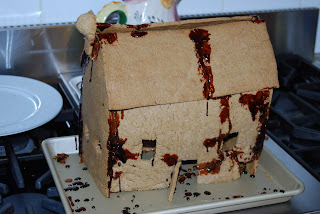 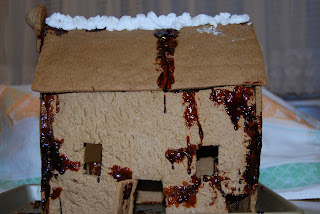 I hate everyone. Gingerbread houses are total bullshit.
Posted by Aviva O'Byrne at 8:54 PM 4 comments:

Email ThisBlogThis!Share to TwitterShare to FacebookShare to Pinterest
Labels: gingerbread 2 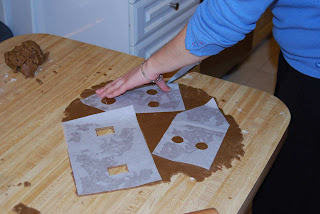 The December 2009 Daring Bakers’ challenge was brought to you by Anna of Very Small Anna and Y of Lemonpi. They chose to challenge Daring Bakers’ everywhere to bake and assemble a gingerbread house from scratch. They chose recipes from Good Housekeeping and from The Great Scandinavian Baking Book as the challenge recipes.

I can do it I know I can!!!!!!! Here is my excuse: my mom used the kitchen every single day this week except today starting at 3pm. Little did I know the dough had to chill for four hours. I really pay attention let me tell you.

Please enjoy these lovely beginning photos of this excellent project...hopefully you will see the finished product tomorrow! I am SO EXCITED. 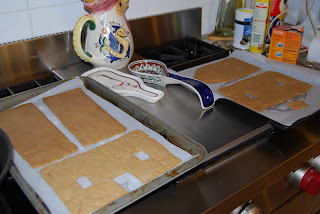 Posted by Aviva O'Byrne at 9:42 PM No comments:

Email ThisBlogThis!Share to TwitterShare to FacebookShare to Pinterest
Labels: gingerbread 1

I didn't do anything for Chanukah this year. No candles. No deep fried delights followed by supreme stomach aches. No decorations. No party. Boo.

I'm sad about it really. Each time the holiday season rolls around I think of that song Kyle from South Park sings about being a Lonely Jew On Christmas. I have plenty of Jewish friends that probably all do holiday stuff with their families but I don't have really anyone to do that stuff with. My family is tiny. Really, really tiny. They've also lost interest in holiday festivities. Half of them are Catholic anyway but they don't have a relationship with us. My entire family in the United States consists of 5 people including myself, and then I have one uncle that I send a holiday present to every year. We don't communicate but I do it anyway. This year he gets wine from Chateau Ste. Michelle in Woodinville, WA.

I used to HATE the holiday season. HATE IT. I would feign illness to avoid going to any boyfriend's parents house for Christmas. If my work needed me for Christmas Eve, no problem. I would stay late if need be. I made efforts in the past to go to meet a boyfriend's family and found myself in some alternate reality where people gathered around the piano to sing. What the fuck? They would try to get me to sing too and I didn't know any of the words and of course these jerks are in choirs and stuff. Ugh! I never knew what gifts to get people and the boyfriends all had a bunch of siblings and I have none and I have no idea what to get a 6 year old or an over sexed teenager. Even last year I was nearly having an anxiety attack about having to hang out with someone else's family. My stomach was all in knots and I became dreadfully sick the next day. Indulging in the mixture of chocolate eggnog, red wine, beer, and rich food may have had something to do with the sickness but I'm sure anxiety contributed. I've never had a relationship with a Jewish guy and despite wanting to be invited to Chanukah parties, I am sure it would freak me out just as much.
When I was really little my family did it all. We had a fake Christmas tree that we brought out every year. We had an electric Menorah that we put in the window next to the tree. We decorated windows and outside the house with lights. I have no idea what happened to all that. I don't even remember the last time we did it. Maybe they stopped when I figured out that Santa wasn't real? I didn't like that he wore a wristwatch in the photo I took with him. It seemed to me that Santa should know what time it is without a watch so it was clearly bullshit.

Holidays were very confusing to me as a child. I didn't understand why people said I should get 8 presents and other people said that you get presents when you wake up on Christmas day and I totally didn't get how that was supposed to happen without a chimney. Maybe my family decided it was best not to have holidays at all.

The last Christmas I had with my extended "family," was over 10 years ago. They invited us over after I mentioned to my aunt that it would be nice for us to all get together for something other then a funeral. So we made an effort to get along. My cousins played video games the whole time and barely spoke to me. I caught my aunt and uncle wrapping cookies from Sam's Club after dinner so my parents had a present. My parents bought them the exact same thing. I walked into the bathroom when my uncle was peeing. Shudder. My aunt's mother's husband kept singing incomprehensible gibberish loudly. Eventually my aunt played piano and there was some unfortunate belly dancing. My uncle told me I was getting fat. Good times.

Only recently have I taken a different approach to these holidays. I'm really trying to see all the nice things about it like the smell of real Christmas trees in friend's apartments and the unique ornaments they have collected. I try to think of my friends as family rather then hoping for these bozos to get with it. For the last few years I take my family to a performance of some kind. This year I was lucky enough to see the Nutcracker by the Pacific Northwest ballet in Seattle, and The Snow Queen at Victory Gardens Theater in Chicago. When I have a nice place of my own then I'll throw Chanukah parties and maybe that will have to do. Christmas is a nice day off and therefore something to look forward to.

I leave you with the lyrics to Kyle's song:

It's hard to be a Jew on Christmas
My Friends won't let me join in any games..
And I can't sing Christmas songs Or decorate a Christmas tree.. Or leave water out for Rudolph 'cause there's something wrong with me..
My people don't believe in Jesus Christ's divinity.. I'm a Jew, a lonely Jew.. on Christmas. Hanukkah is nice, but why is it, That Santa passes over my house every year?
And instead of eating Ham I have to eat Kosher Latkes..
Instead of Silent Night I'm singing hey-hach-dol-gavish.. And what the fuck is up With lighting all these fucking Candles, tell me please?
I'm a Jew, a lonely Jew.. I'd be merry but I'm Hebrew on Christmas
Hey Little Boy, I can't help but hear, You're feeling left out of Christmas Cheer..
But I've come to see that you shouldn't be sad This is the one month that you should be glad.. Because it's nice to be a Jew on Christmas
You don't have to deal with the season at all.. You don't have to be on your best behavior, or give to charity
You don't have to go to grandma's house with your alcoholic family..
And I don't have to sit on some fake Santa's lap And have him breathe his stinky breath on me! That's right! You're a Jew, a stylin' Jew.. It's a good time, to be Hebrew.. on Christmas.
Posted by Aviva O'Byrne at 6:57 AM No comments:

Recently my friend S mentioned that I need to learn how to write everyday and not just when the mood strikes. Well a hardy fuck you S. You have made me paranoid about this writing! I feel like I have nothing to say. S also mentioned that this blog has seemingly taken a turn in subject matter. But I don't feel like cooking! I don't feel like using a kitchen that belongs to someone else. Not as much anyway.

In an effort to put more meaning into my everyday I have become way too introspective and overwhelmed. Despite the fact that I made a New Years resolution about 5 years ago to "follow my bliss," I am obvioulsy still unfulfilled.

Today my boss said these exact words to me: "You're way too smart for this job. You should be looking into something else." Then he proceeded to show me a listing for a government job in Seattle that he thinks I should apply for. He told me that he feels it is part of his responsibility as a manager to see bright people move up and achieve better positions for themselves. Just yesterday I went to a session with a career counselor and we both agreed that getting stuck into that realm could bring me good money and stability here and now but I would still be unfulfilled and searching.

I wonder why there weren't other managers along the way that could have encouraged me in a field I wanted? All I remember was getting the "you have to pay your dues," and "you've got to start somewhere" speeches over and over. All I did was start somewhere and pay dues for years. Ugly. I don't think my goals were unrealistic, especially since I knew people that similar paths worked out for. It's so strange that I am being pointed in a direction that I don't want to go but it is where I received the only positive feedback as an employee. How ironic to be good at something you hate to do.

I'm trying to figure out if I just have bad judgment in terms of wants and desires or if I need to be more honest with the world.
Posted by Aviva O'Byrne at 7:42 PM No comments:

I've got nothin.
Posted by Aviva O'Byrne at 4:06 AM No comments: