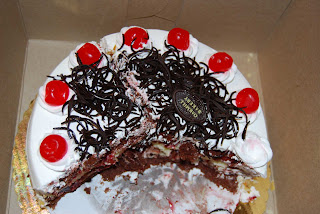 Black Forest Cake is my uncle's favorite dessert of all time. He mentioned how it had been years since he had a taste of it due to his diabetes. It had been years for me too because we only used to get one for his birthday. When he suggested that he pick one up for the family on New Year's Eve, and I said sure why not. His philosophy on the diabetes thing is that if he eats a piece of cake he just has to spend 3 hours at the gym the next day.

My uncle isn't the easiest person to get along with, not that he's mean or anything. He just talks like a truck driver, is easily forgetful, repeats the same sentence until your head explodes, and has a general social difficulty all the time. He couldn't decide where to get the cake so I suggested Oak Mill Bakery. We debated on the merits of this bakery and that bakery. Then he called my mom before he went to the bakery to debate about if he should get the Black Forest or something else. Then he came upstairs to ask her again if she would like a different cake, or if maybe she could come with him to the bakery to help him pick one out. They got into a screaming match in which I distinctly heard her say, "Just make a decision already. I don't care what cake you get. I'm not going to eat it. I don't care. Just go and get whatever you want!" Then he called from the bakery and asked to speak with my mom. She wouldn't take the phone so I had to talk him into the purchase so it would just be over with. After I said "Yes I think you should get the Black Forest Uncle, everyone will like it." He said: "It's thirty dollahs. Expensive." "Ok get something else." "No, no, no. I'll get it."

I'm not sure when my mom was expecting him back but since she was annoyed with him they did not confer on the time for dinner. She was serving my dad and I, Grandma, and Uncle which is the standard family gathering, and frankly the only family I've got. I have previously mentioned that Mom is also difficult to get along with...so she served dinner without him and had to re-heat when he showed up. I don't think she really wanted to have Grandma and Uncle over but always feels obligated to cook for them and have them upstairs for holidays. She rented 5 movies thinking that she would roll in the New Year relaxing with a good comedy, but Uncle and Grandma never, ever watch movies. She told me that she was hoping to convince them to sit down and watch something funny with us, but secretly she must have been hoping to get rid of them somehow.

My Uncle's presence was awarded with this from my mom, "You couldn't have gotten a smaller cake? Who's going to eat all this cake?"

Uncle: "That'z what they had. Thirty dollahs."

M: "They must have had a smaller one."

U: "No. That's all. Dis is good dinner. You gonna watch dat football wiz me Aviva? Itz ah good game."

M: "Of course they had a smaller one. You just didn't see it."

I walked into the kitchen and asked Mom to please stop harping on this but it was no use. My mom is the type of person that can't make her point and leave it. She has to say the same thing at least 40 times so that it's clear she is right and anyone who disagrees is a total idiot.

After laying into him about the size of the cake it was that no one wants to hear him talk about football, then it was that he needs to use a napkin, then it was that he is sleep deprived and isn't making any sense, etc. Next the two of them argued extensively about Jewel food store in which they worked together nearly 40 years ago.

M: "You don't even know what you're talking about! The one on Kedzie? There wasn't even anyone like that there."

M: "Oh please. Haven't we heard this already? Are you going to say the same thing over and over? You don't even know what you remember."

I tried to stop this insanity, I really did. I tried to bring up conversation with Grandma. I talked about my work which I can't stand talking about. No one heard me. Dad simply left the room for a while and raised the volume on the record he was playing. My uncle usually allows Mom to stampede him to the ground but every so often he flips his lid.

I don't remember how it happened exactly. I know that we were all back at the table and the cake was being served with chamomile tea. We were about an hour away from midnight. The two of them continued to bicker, but my uncle was directing most of his conversation towards me to avoid her. He was mid-sentence about something when Mom said loudly: "Who wants to watch a movie?"

A volcano erupted. My uncle stood up and shouted at her as if he were a drill Sergent or criminal investigator on Law and Order. Then he started in on my dad for not controlling his wife to which my dad started yelling back about watching his own behavior, and not to speak to his wife like that, and then Grandma got involved telling my dad that Uncle was right and that my Mom is having behavior disorders of which he is in denial. I kept my face in my hands throughout this ordeal and said nothing. Uncle stormed away after several minutes of shouting, and Grandma stayed for a few minutes to lecture the three of us. She said that there were seven children in her family and no one ever screamed at each other around the dinner table.

G: "Why dis happen all time wiz us? Shame on you. I not come here anymore."

So that was my New Year's Eve. I asked Mom why she can't just be nice to Uncle even if he is supremely annoying? She said that I just don't understand and that this happens all the time with him. It seemed to me that she pushes him to it but what do I know about their relationship really, and when is it ever ok to scream at your sibling like that? I've never had a sibling so I am completely in the dark about this. It honestly is crazy to me that two people approaching their 60s can behave this way on a holiday when something as beautiful as a Black Forest cake is right in front of them. Who argues over cake? I have to tell you that this is no way to bring in the new year. I just wrote about how I've been trying to embrace the holidays and be more festive, and now feel stupid. When my only family on planet earth can get so ugly over something so simple it makes me feel completely alone. And of course I end up eating more cake than anyone. 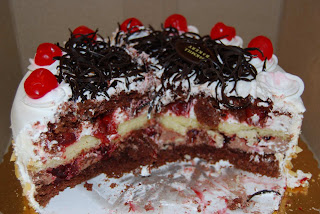