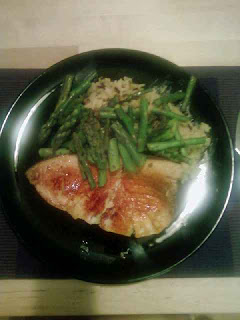 So sometimes cooking isn't my forte. I much prefer baking as I find it to be a relaxing fun and often delicious hobby. However, I always want to try new things and I constantly find recipes that I think are worth a try. Occasionally an idea pops into my head of something I haven't tried before and I must go for it regardless of expense or time involved. Usually I do pretty well, this time not so much.

This is a pan fried (mistake) swordfish fillet with rice pilaf and sauteed asparagus. It sounds good but the pan fry idea was all wrong. The taste was ok as I put white wine, paprika, and lemon juice on it but the texture was mushy. It was bordering on gross for me but I ate it anyway since it was a healthy meal. This was a good learning experience. The fish smell in the house was tremendous and lasted for about a week. I definitely have to buy a grill.

Once I got it into my head to cook duck. I found a recipe for duck confit with sweet potato gnocchi and Swiss chard. Now that ended up a success. The smell was nice, the meat was juicy, and the taste was excellent. Granted this was a heavy fat laden meal so maybe that is why I liked it so much. The gnocchi needed some work but for a first try I was pleased. The whole meal cost around $30 to make but I fed 3 people with it. If we ate it at a restaurant it would have been $30 each.

I saved the bones from the duck and made a stock with it thinking that I would avoid waste. I found a recipe for soup with duck stock. I called it Duck Duck Soup. It required quite a lot of vegetables and creme fraiche. I worked on this for a long time and was very excited to make the most use out of the duck but then it all went in the garbage. It was terrible bland and just plain yuck. Oh well.

Still it's good to try new things. Failure or not.
Posted by Aviva O'Byrne at 9:43 AM