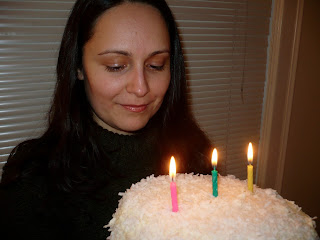 Last year for my 33rd birthday I made a coconut cake from Ina Garten's book and let me tell you, this thing was just plain stupid. STUPID. I don't know how anyone can get away with a published recipe that calls for: 5 sticks of butter, 2 cups sugar, 1 pound of cream cheese, 1 pound of powdered sugar, 10 oz of sweetened coconut, and 5 eggs. She might as well have called it: Cake To Kill Yourself With. Yet, I made it for my birthday.

I was craving a moist coconut filled cake and I thought the picture in her book looked so lovely. Looks are deceiving! I was astonished at the amount of fat and sugar but felt that maybe sometimes that's what it takes for deliciousness. Now that I've made it, I can tell you that it is totally unnecessary and ridiculous. You can certainly make just as good a cake or better without blocking a damn artery.

It was so dense and heavy. It wasn't a bad tasting cake by any means, but it shouldn't feel like weight lifting just to serve it up either. I really prefer a light springy moist cake that has a slight crumble to it. This was more like a chunk of hearty coconut sustenance proper for times when you are freezing in Antarctica, or if you're in the NFL and eating two entrees plus dessert at the Cheesecake Factory really aren't enough calories for you. 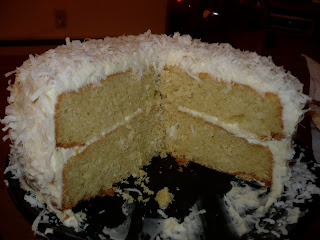 Layer cakes have always been a tremendous challenge for me. I've never had quite the right tools for it but felt like they're worth a try anyway, especially when birthdays come up. I like the idea of trying various fillings and frostings, and I also like trying it without the usual amounts of fat and sugar. But in the effort to improve, I decided to follow things exactly as they are in the books first so I can make changes later. My change to Ina's coconut cake is: use far less butter and cream cheese or just use a different recipe for crying out loud. I'm glad I gave this a try and indulged in ultimate indulgence for my birthday, but this one won't be made again. Or maybe I would make it for someone else so that the temptation is not sitting around my house! 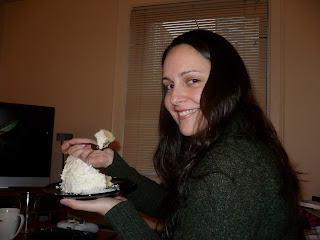 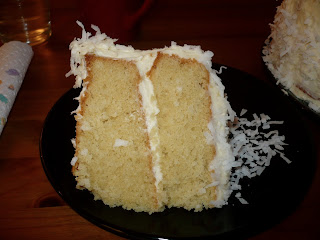 Today is my 34th birthday and I admit it has come as a bit of a shock. I can't believe that I started this blog for my 30th birthday and the time has just flown by. Instead of making a cake this time, I've received a lovely coconut pie from a bakery as a present. The best part about that is not knowing how much of any ingredient is in there!
Posted by Aviva O'Byrne at 11:37 PM