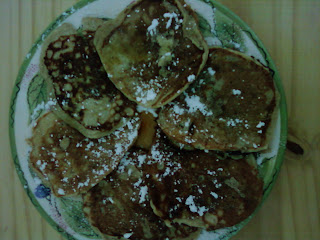 Yesterday I woke up hungover and hungry. I quickly realized I had practically no food in the house. I can't express how badly I did not want to walk down to the grocery store in the rain. I stared into the fridge for I don't know how long. I did have some bread and one egg. One egg and bread? No thanks. My eye wandered over to the door and there was some leftover buttermilk I had bought for a cake a week ago. Buttermilk, one egg, flour, maple syrup....yes I had everything to make pancakes. But plain pancakes are boring, so I stole a lovely gala apple from my roommate.

My Grandma makes apple crepes with granny smith apples. This is an absolute favorite of mine and I love that she pronounces it "craps" instead of crepes. I made something very similar to her recipe yesterday. I chopped half of the apple into small pieces and sauteed it in butter so that it became soft and released some juice. Grandma does this for a very long time on a small fire and makes them almost into a thick jam, but I like the apples to still have a tiny bit of crunch. I only sauteed for a bit and added cinnamon and a tiny bit of maple syrup. I also put maple syrup in the batter instead of sugar because I think sugar in the batter makes it over the top sweet. The apples needed to cool briefly and then I added them to the batter and a few minutes later I had a hangover breakfast fit for a princess.

I love the idea of making something out of nothing. If you have a few ingredients that you always keep in the house there are countless options for them. Grandma is the type of person that always manages to have exactly what you need in the house. My mom is the opposite. She over-buys groceries and then forgets something major like sour cream. When she realizes that she needs it she will check downstairs to see if Grandma has it and she always does. It's amazing. It is partly because she enjoys simple dishes that cost practically nothing to make and it's also because she is a culinary genius. One dish that I grew up eating at her house is something nearly everyone I know thinks is disgusting: pasta with cottage cheese and cinnamon. Oh my god it is delicious I swear! So simple, so yummy. She also used to make me white rice mixed with shredded apples, cinnamon, and sugar and baked them together like a cake.

Incidentally just plain white rice with plain natural cinnamon is a home remedy she knows for diarrhea. I kid you not. Grandma knows all kinds of home remedies. When I was nine years old I had the biggest stomach ache of my life and had to stay home from school. She made me swallow spoonfuls of baking soda four times that day. Yuck! It was disgusting. When it turned out that I had to be rushed to the hospital for emergency surgery the poor woman cried all night thinking that the baking soda ruptured my appendix.

Baking soda is one of those things that should always be in the house whether you are swallowing it or not. The other day my boyfriend had a few items leftover from a chocolate birthday cake he made me. I was looking at them and realized that I had a smushed banana in my purse that I forgot to eat earlier. Chocolate banana bread? He had everything I needed except eggs. I had never made a chocolate banana bread before. I've made one with chocolate chips, but for this one I was going to use cocoa powder. I also needed more then one banana and he did have some but they weren't nice and mushy like mine was. I figured it was worth a try.

I was sending him to the store to pick up razors for me anyway so I told him he might as well pick up some eggs and we'll have a perfect little banana bread that night. The only reason that I needed him to pick up razors for me was that I am currently having water pressure issues at my place and since I was going there after work, it was nice to have a real shower. I jumped in shower while he went to the store thinking that he would come back before I was finished. Nope. I didn't want to just stand there waiting for the stupid razors so I toweled off and headed for the kitchen. I preheated the oven and mixed the dry ingredients in one bowl and the wet in another and had everything ready for the egg arrival when he walks in and sees me with wet hair wearing a towel and holding a mixing bowl in his kitchen. Not only am I proud to have made something out of nothing but I managed to turn a simple banana bread into a sexy one. Despite what this scene may or may not do for you, I will have you know that I did finish the shave and the bread eventually and the non-mushy banana gave it excellent texture.

He raved about the bread and kept telling me what a wonderful woman I am and out of nowhere I said:

Email ThisBlogThis!Share to TwitterShare to FacebookShare to Pinterest
Labels: Apples and Bananas