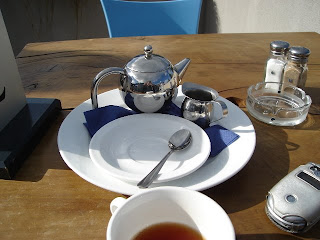 Yesterday I made my absolute favorite cookie except I really just poured the dough out into the pan and made bars. Of course it's easier, but I truly like bars better. Cookies are hard not to burn and I always worry that they are too thin or too dry. In my kitchen right now is a pan that has a quarter left in it of oatmeal chocolate chip bars because I managed to gobble nearly the whole thing. Oatmeal Chocolate Chip. Mmmmm.

I have no idea why everyone is so hung up on oatmeal raisin! Why put raisins in a cookie when you can have chocolate chips? I rarely buy sweets with lunch or while out and about but if I see that a place has an oatmeal chocolate chip cookie, it's a must have.


I usually bake to experiment or to have muffins for breakfast for the week but when I make something like this, it's just for comfort. It's just because I am a little stressed or down or just have been craving it and can't say no. There is nothing that can soothe me more then a cookie and some tea.

When I was a kid we had tea time every day, except it wasn't at 4:00, it was after dinner. If my mom felt like making dessert it was usually on the weekend or we were having people over, but nightly we had tea and cookies. It was usually cheap tea like Lipton and my parents had it differently according to their traditions. My mom put a slice or two of lemon in hers and my dad had cream and sugar. We always had various sorts of butter cookies that came in a tin because my mom hates making cookies but my dad and I love to eat them. When I was in high school my mom became worried about the extra fat and sugar in our diets so tea time became just about the tea. We became experimental and tried all kinds of delicious teas. My dad fell in love with Indian black teas that he now drinks without cream or sugar and my mom must have red zinger and green tea in the house at all times. Before this, the only other time we had something besides Lipton was when one of us was sick. Chamomile was my mom's drug of choice for me and I loved it so much that I thought it was something special you only got when you're feeling bad. Now I drink it every other day to wind down a bit before bed or to settle my stomach after a meal.

I drink tea every day. Sometimes I drink it for the caffeine lift, sometimes to mellow out, sometimes to help me soothe an aching stomach, or to help ease a cold. My family can sit around a teapot for hours and hours. If I drink that Indian tea with my dad I usually have so much that I end up jittery until 3am. Since being in Seattle, one of my absolute favorite things to do is to go to The Crumpet Shop and get tea to go and just walk through the Pike Place Market. No matter what mood I have going into this scenario I always feel utterly at peace if I have that smooth warm taste of tea with me. If I can see mountains across the Sound then I really have an "I love Seattle day."

I have several memories in which tea played a part. Sometimes a biscuit was involved, sometimes not. The first time I had apple tea was in Turkey. My parents and I went to a carpet factory where we got to see every step of the process in making a Turkish carpet. We saw people hand dying the threads and then women working on these fabulous intricate designs that took months to do a few inches on. At the end of the factory tour they have you sit down with the amazing apple tea served in tiny narrow glass cups and show you their collection of the most beautiful carpets they have. Many of them were silk and changed color depending on how they were held up but that part of it didn't really do anything for me. I kept on thinking of the artistry of those women back there behind the scenes while I drank sweet apple tea and that is the clearest memory I have of being there. I don't remember what the finished carpets looked like at all.

A few years ago Grandma had a knee replacement. My mom and I went to the hospital with her and honestly, I'm not so good at that stuff. Hospitals and doctors freak me out and seeing my fragile grandma laying there waiting for them to take her in and preform some kind of weird science on her was beyond difficult for me. I was pacing and holding back tears before anything happened and my mom asked me to go get her some tea. I don't think she really wanted any tea but she certainly didn't me to freak out my grandma or maybe she thought I could handle it better if I just got a quick breather. I went to the cafeteria and got us green tea instead of black because I was jittery enough and as soon as I got back they were ready to take her away. I held it together and kissed her and mumbled some kind of encouragement before they wheeled her down and then once she was gone I crumbled to the floor in sobs. The fear was unbelievable. It was hours before we heard anything. We just sat there and sat there and drank green tea after green tea all day. It was all I could do until the surgeon came out to talk to us and said that it went well. We went home and were able to eat something small then.

There is a day that I can say in all sincerity was the happiest day in my life so far. It was two years ago on March 13 and that was the day that I swam with the Dusky Dolphins in Kaikoura, New Zealand. Swimming with dolphins was always something I would have liked to do but never really thought I would get a chance to. I made it happen due to a decision that changed my life forever.

On March 12, 2007 I was supposed to fly back to the US after a 3 week tour of NZ but I didn't get on the plane. It didn't feel right to leave so I extended my ticket for two months later and just stayed. I left my tour group that morning and walked to a near by hostel in Christchurch where I checked in and did some planning. At the time it felt like a panicked decision because I simply did not want to go home but I felt more and more confident with every step toward that hostel. I had met someone weeks earlier that told me they were going to Kaikoura to swim with the dolphins and maybe take a whale watch tour. It sounded like a damn good idea so why not? They mentioned what bus they took and so I talked it over with someone at the front desk of my hostel and she arranged for me to get picked up in the morning and she also told me of two good hostels there. I picked the hostel that was quite far from the place that offers the dolphin tour so I walked and walked and walked and it was getting late and I was afraid that I would miss the tour! I asked a local kiwi woman if she knew where it was and she said she would drive me. I didn't want her to go to the trouble but she insisted and in 2 minutes we were there and in five minutes I was in a disgusting wet suit. No matter, the excitement was taking over me. They only allow 13 swimmers out there at a time and so while it may seem like very few we did bump into each other a lot and I got kicked in the head with a flipper.

I made contact with one dolphin for a while. I don't know if it was a she or he but I'll say she here. She circled around under me for a long time so I followed her by making circles too. They are attracted to noise and song so I kept humming and she just stayed with me. She swam away once and I felt sad like it didn't last long enough but she came back and circled a little more. It was absolute magic. When we got back on the boat we drove out a little further and watched them swim along and jump and play. This was euphoric for me.

When it was over I felt a chill all through my body. It wasn't cold out but I needed to sit down and have a spot of tea and inhale the air. I sat outside and celebrated the most amazing experience of my life with earl grey and a biscuit. I thought about how when you want something to happen you have to go for it and that you can do what you want and what makes you happy and I just did. I even took a picture of the scene because I wanted to document Happy.
Posted by Aviva O'Byrne at 8:32 PM