In junior high I thought myself to be something of a painter. I liked painting flowers mainly because of the colors and beauty and simplicity. Several of my old artworks adorn the homes of my family members. When I saw the paintings there I never paid any attention to them.
I haven't painted a thing in at least ten years. In college it quickly became obvious that my interest in painting was only some sort of childish playfulness. When I was a kid I attended a weekend art school where they taught me to re-produce famous paintings. The idea was to learn technique that way. As an adult I felt embarrassed that I had done so much reproduction but practically nothing with unique perspective. That began the feeling that I was no artist at all.
Today I saw the real painting of Georgia O'Keefe's Yellow Hickory Leaves with Daisy, and I think for a kid, mine isn't so bad at all. 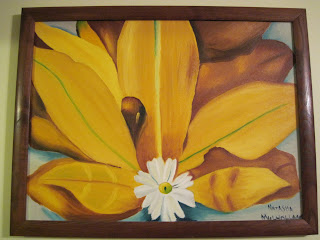 A couple years ago I made a dish for a Christmas party that was a big hit. My family used to make this every once and a while and they served it with chicken soup. It's a ton of work to make these, not difficult work, just time consuming. Instead being a usual dinner in my household, it will have to be served as something special; something to look forward to. And so, I declare Nalesniki to be my official Christmas dish.
Some people make chili for Christmas or goose, ham, tamales, or whatever your special family recipe is, but mine will be these. They're pronounced Nah Lesh Niki, which is endless fun to hear from everyone. The way I describe the dish is like they're savory meat crepes. Of course you can make them with turkey, mushrooms, cheese, and whatever you like. I made mine with meat, onions, and something special which I can't reveal. It's a long process but once you're there it's worth it. The simplest way to explain is this: make crepes, cook meat, roll up, fry. I put in too many onions this year so maybe I'll have to make them again before the holiday. 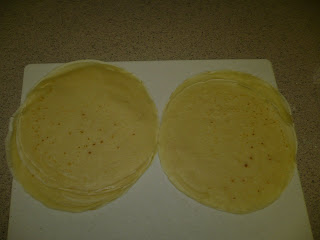 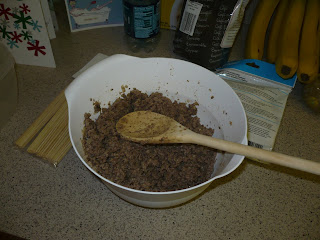 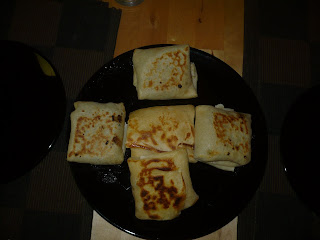 Posted by Aviva O'Byrne at 3:15 PM No comments: 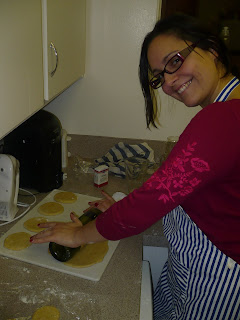 In the effort to keep some sort of holiday tradition I managed to make sufganiyot, which is a sweet for Chanukah. Because the holiday is about the miracle of having enough oil to provide light, most of the foods served are fried. Sufganiyot are doughnuts. I made them from scratch and made the whole place reek of oil, and I made them on Christmas Eve instead of Chanukah, so there you go. At least I tried.
Here is what to do when you can't find your rolling pin: 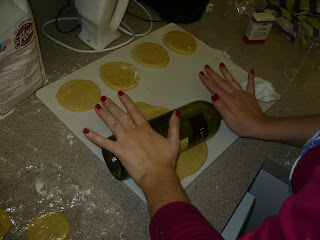 No idea if that is hygienic. I washed the bottle and it worked well enough. Clearly I'll be taking over for Martha Stewart and her ultra perfectionist attitude any day now.
The oil was too hot when I dropped the first ball in and it burned to a crisp right away. The smoke filled the room and I completely freaked. Furious that I decided not to buy the oil thermometer due to the price, I nearly gave up. On the second, third, and forth tries it seemed to work ok. 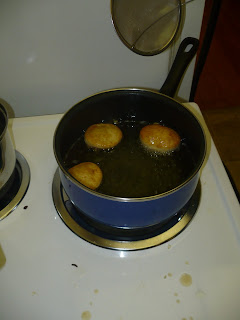 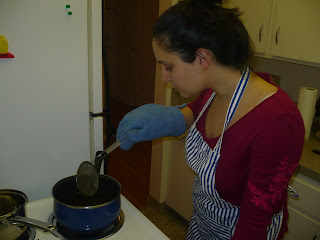 I can't say that these were a total success but they took a pretty picture. You can't tell that some were hockey pucks. I'll have to try again. Since I worked on them until 1am, it's a good thing I have a year until Chanukah. 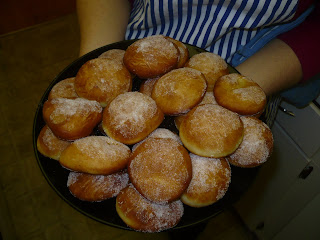 Posted by Aviva O'Byrne at 2:27 PM No comments: 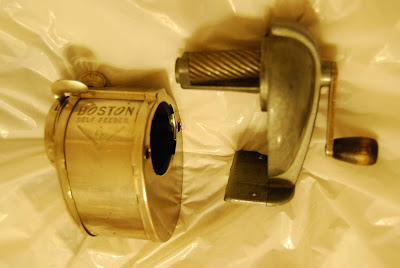 In 2010 my goal was to get rid of clutter. I tried to help my family do the same but was met with gigantic opposition from my mother. Every stupid little thing in the house had some great attachment to it. I ebayed a few of their items anyway but then stopped in order to avoid her wrath. 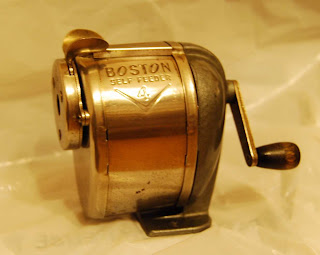 This pencil sharpener belonged to my grandfather. Anything that reminds my mom of him must be kept in a dusty box forever. I ebayed it anyway since it had a tiny bit of worth and someone actually wanted it. When I mentioned wanting to ebay she would bring up the fact that I got rid of a perfectly good pencil sharpener. She also stated that there was one at work similar to it but not nearly as good as her dad's. I asked her how anyone could be emotionally attached to a pencil sharpener and she said that I just wouldn't understand.
There was also a TV I sold last year on craigslist. It was a 1967 Zenith black and white television, made right here in Chicago, and it still worked. 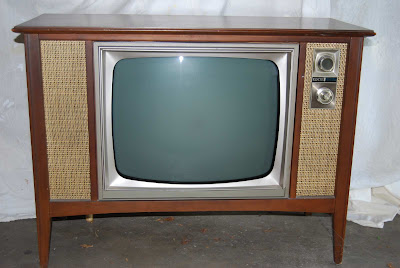 My grandfather bought this TV and had it waiting in the apartment for when my mom, grandma, and uncle made it over to the United States. It was their first television and my grandmother swore she would never get rid of it. Truthfully, if I had my own home and not just some apartment I would have kept it, but she grew tired of it sitting in the basement. I think it made her sad when she looked at it and eventually she asked me to sell it for her. My mom threw a fit about the TV, but I'm not sure why hanging on to this item serves her. She will still hold the shock of seeing her own TV for the first time in her heart and memory. She remembers every detail of her first day in Chicago and what it was like to see her father after five years. She has told me over and over about the first time she saw him and didn't think it was her dad. He was skinny and had lost two fingers in an accident at the bakery. She was afraid of him for a minute and by the time they got to their apartment in Albany Park, she was completely afraid of Chicago.
I've often reflected on loss of culture in my family and in my life. It hadn't occurred to me just how much my mom felt that she lost. I always saw it as unrelenting guilt and meaningless desire to return to how things were. Somehow it took the entire year of 2010 to understand my mom's feelings a little better. Of course I don't think it's necessary to hold on to a stupid pencil sharpener, but I do know the need to hang on to something.
I assume that I did her a favor by getting rid of items like these. There must be more letting go at some point. If there is anything I learned at school last semester it's that the past often doesn't serve us. To be stuck there is to stop living. But how do we learn to let go?
Many years ago we saw the film: Left Luggage together. I completely identified with the main character, the nanny, but Mom identified with her parents. The nanny's father developed an obsession with finding items in suitcases he buried during the war. His family thinks he is crazy, but he just wants to see them again, to feel a connection with something lost.
My mom has an address book that belonged to my grandfather. Sometimes just looking at the way he phonetically spelled things out brings her to tears.
Posted by Aviva O'Byrne at 8:45 PM No comments: 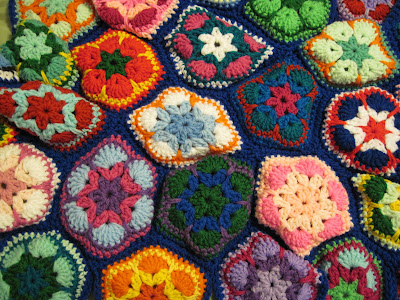