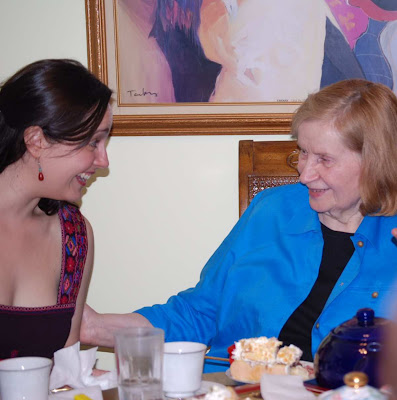 And there you have it. Grandma turned 80 last month. There was music and dancing and enough food to feed the US military. It was with great pride that my mom and I were able to pull off this event and give her one good party after quite a lousy year. I honestly have never seen her smile so much in my entire life.

What did we serve? Let's see. I made a berry fruit salad with mango and brandy and a pasta salad with plenty of veggies. I also brought the wine and beer, and I supplied a pear cake which was large enough for 30 people.

We had an accordion player and a singer attend who knew all the old timey songs my Grandma likes. The singer had 5 languages in her repertoire and despite doing "Hava Nagila" four times, I was impressed that she sang exactly what Grandma wanted to hear. I know a lot of those songs because my family sang them to me when I was little, but there were a few I had never heard. Grandma sang along and forgot about the crowd around her. For an anti-social hermit this was nothing short of a miracle. She said the next day that the music reminded her of her time. That sentence really blew me away.

Of course there was hilarity behind the scenes. Mr. Accordion Shmuck ended up being a very dirty old man. He kept singing to me and telling everyone what a beauty I am. He pulled me aside and said, "Why don't you come live with me? I'll take care of you. I'll give you anything you want."

"You mean you want me to use you for your money?"

"You can have it! Have it all. I have a collection of books. They're yours."

"Who cares about her? She is wicked. You are delicious. I'd give you to my son but he also married a horrible snake."

I told my mom later what a pig this guy was and she didn't believe me! She actually said, "Oh big deal. So he put his arm around you. You're overly sensitive."

"No seriously Mom. He did the whole hand brush against the ass thing and pretended it was an accident."

I did my best to deflect this nonsense considering that the music made Grandma's night. It turned out that my dad had a pretty big issue with this gross shmuck but he decided to deal with it by pounding vodka.

A friend of the family with a strong alcoholism problem cornered every guest and said, "You're either drinking with me or you're drinking against me." He put one of the more slender vodka bottles in his back pocket so he could hide it from his wife. Eventually he put it down and I managed to hide it. I told my dad about it the next day thinking he would be grateful but instead I got: "I was looking for that everywhere!"

Another dirty old man, but at least a more friendly normal one, was trying to convince me to date some Lithuanian young guy he knows. The description I got was: "I know very nice nice guy. You very nice woman. Why not come over meet, shake hands, and if you go separate vays you go separate vays. Ok? You come over. Tomorrow."

"What? What are you talking about?"

"I vant dance on table at your wedding. You must meet him. I have feeling."

"He is musician. Struggling but very very talent. He move here couple years from Lithuania. Ok? You meet him."

"Why not? He hard vorker. He strong like animal. He vash floors right now for living but will do anything for vorking. He have plenty energy. He vant family and vant meet American."

"You're setting me up with some animal are you?"

"Animal? When it comes to making family I sure he will be animal."

Luckily a friend came to take photos of the event and she stole me away. The family didn't know she was there to take photos because the sneakier you are about stuff like that, the better. Unfortunately my uncle considers himself to be a photographer and got pissed off that my dad didn't have the video camera ready to go. Dad grilled every single item for the party and was sweating over the fire all day. They got into an argument since he was obviously busy and it was settled by them yelling at me to get the camera. Fine, fine whatever. We all should have thought of it sooner but ok. I ran upstairs to get it but was yelled at by Mom who was making yet another salad at like 8 pm. She accused me of not helping enough. I ran back down and handed the camera to my uncle without another word. I didn't follow up because I thought he knew how to use it....

A little later my friend said, "Dude, I think your uncle has been shooting the flowers for like twenty minutes."

"I should write a book."

The running up and down the stairs was a bad idea considering I had recently had the largest asthma attack of my life. I started coughing and hacking and had to leave the party for a while. The attack should have put me in the hospital but I was a stubborn idiot and ended up suffering an entire month of coughing up a storm. A friend of my mom's found me and tried to convince me that I needed a spiritual healer to get rid of my asthma.

"This inhaler. What is it? It's not helping you. I don't believe you should use it. You must find a natural way."

"Well, some drugs are necessary. Besides it's a new inhaler. I just started it."

"What does it come from this asthma?"

"I don't know. I'm allergic to something in the air. It just happens. This hasn't happened in like 3 years though so it's not a big deal. Really."

"Sure. Sure. And what are allergies? The doctors will never tell you. It's a mental imbalance that causes things like this."

"Oh my. It's just something I have to deal with. It only happens once in a while."

"I'm sure. I'm going to stay on track here though because I really need to be able to breathe."

"He will talk to you and use oils and herb teas. It will go away and you will never deal with it again. I'd like you and your mom to come with me to his next seminar........"

That conversation went on so long that I thought my brain was going to explode. I was thankful the coughing that managed to break up the conversation a little. Grandma rescued me from her when she needed help managing the stairs.

We had cake inside because a massive storm came in. It got very late and the company completely drained me. I got short with a couple people and really couldn't wait for them to leave. I didn't want to be testy on account of Grandma so I tried to do my best. She absolutely loved the entire evening. All in all it was a tremendous success with the exception of no one remembering to put a tape in the video camera.
Posted by Aviva O'Byrne at 9:26 PM No comments: