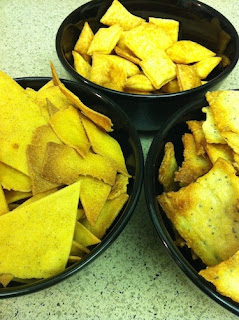 I've made crackers. From scratch. Using the rolling pin for these was enough to make me feel like I had been at the gym all day long! My shoulders ached for 2 days following this procedure. For a moment, I thought what a good idea it could be to make these for your family every so often. They were such a nice snack to have without any sketchy preservatives or coloring. I even envisioned a homemade cracker snack jar next to the cookie jar.

Sarah from All Our Fingers in the Pie as our February 2013 Daring Bakers’ host and she challenges us to use our creativity in making our own Crisp Flatbreads and Crackers! (some recipes found HERE)

I currently work with kids and I can tell you, those hot cheetos really are all the rage. The giveaway neon redness on their fingers and smudges on papers everywhere couldn't go unnoticed. I've even caught a few kids sneaking them to friends during class, even though they are certainly not allowed. And while Tostitos, Goldfish, Cheez-its (which is scary enough in name alone,) and Doritos are fun snacks once in a while, I actually thought these crispy, crunchy crackers I made for the Daring Bakers this month would be a delicious alternative. I generally try to avoid foods with un-pronounceable ingredients anyway.

However, now that I've gone through the trouble...I can't imagine making these that often, or maybe even never again. It was quite the task, especially since I managed to try three different kinds! If I scheduled in making only one type of cracker at a time, then it could be done. I suggest all the parents out there try this once so they can have special snack time and taste the difference. Of course, I'm not crazy enough to tell you that your kids should avoid the hot cheetos altogether! They have to enjoy themselves after all, no matter how neon the color of their food. What do I know about parenting anyway?

I'm very pleased with the way my crackers turned out, despite the fact that the texture wasn't perfect on all. Texture is a tough thing. For these crackers, the dough must be super thin and when I achieved that it often broke apart.

Most ended up perfectly crunchy but some were soft. Most were nice and thin and others were lopsided and way too thick. Timing was an issue as well. I wasn't sure how long to bake each type for and it was pretty hit or miss. I burned a bunch or took plenty out before I should have. This was a pretty useful was to get to know my oven better, and test the strength of my shoulders with that rolling pin! Somehow I managed to make the onion poppyseed, yellow corn, and cheddar cheese crackers.

And now...for the cutest kids in the whole world: