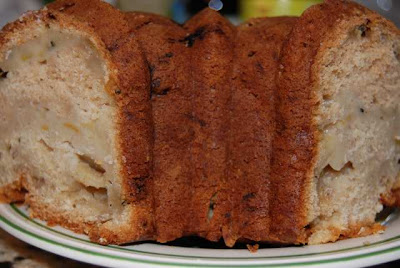 I was able to maintain a no sugar diet for two weeks then destroyed it entirely. I decided to make a fruit cake, thinking that I would eat none of it, but it didn't turn out right and I got upset and had some ice cream. Damn.
I had high hopes for this cake. I got the recipe from Macrina Bakery's recipe of the month. They suggested fruit such as raspberries, huckleberries, blackberries and so on but I didn't have them. I had plums, nectarines, apples, and kiwi. I thought it would be awesome but it was raw and disgusting. The density of the fruit must have brought down the cake's height and smooshed the rest together. I wonder what the technical term for this mess is but whatever happened it was disappointing. I thought kiwi would be so nice in it! It would give it a little unexpected zing and crunch.
When making fruit cake the trick to it is to coat the fruit in flour so that the fruit doesn't all sink to the bottom of the cake. All I can think of is that the fruit I used was so juicy it made too much goo inside or I just didn't put in enough flour. So sad!
Posted by Aviva O'Byrne at 4:15 PM No comments:

In honor of this holiday I would like to tell you an amusing story.

My parents were dog sitting for the last two weeks. This is how much my dad likes dogs: 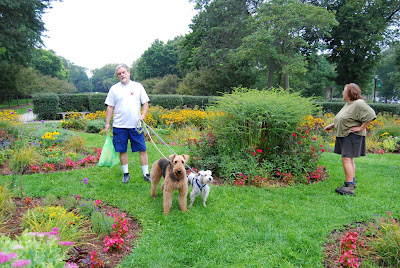 This is how much my mom likes dogs: 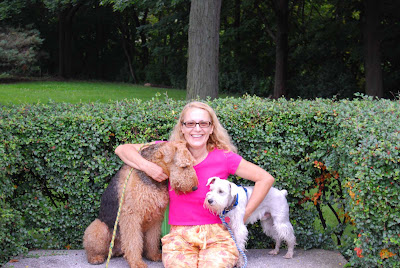 Sometimes my mom has a little trouble with English. Sometimes sarcasm doesn't come through so well in an email. This story involves both problems.

My mom was close to running out of dog food and wanted to get exactly the kind that the owners get. They gave her dog food in a huge container that didn't have the name of the brand on it. She read and re-read the email giving her instructions for the dogs. Thinking that the name of the brand was N Y she went to Petsmart, Jewel, Trader Joes, Walgreens, and Sam's Club looking for this dog food. She asked sales staff if they carried it and they all said no. She even showed a copy of the email to a salesperson at Petsmart who told her that they didn't carry it. She showed my dad the email and asked him to help her find it but he said, "Ok, ok no one has it. Let's go already. Who cares what the damn dogs eat?"

Luckily for her I went to Sam's club with them and looked around for a bit. I thought they were taking an awfully long time to get dog food so I found them and she was freaking out. "This email doesn't make any sense! I've been all over the place! No one has ever heard of N Y with strip steak flavor!!!! I don't know where to go next."

So I took a look at the email.

"Mom. Mom. MOM. Calm down. Listen to me carefully: If you're out of New York strip steak, lamb chops, and pork tenderloin you can feed them dog food. It's a joke."

I have plenty of stories from my latest journey but I wish to share something pressing on my mind first. I am currently in my parent's home and I have engaged myself in a series of projects in order to avoid depression.
1) Go to yoga as much as possible
2) Clean out all old shit
3) Record Grandma giving me cooking lessons
4) Cook and bake
5) Eat healthier (no refined sugar for 30 days)
6) Murder credit card
7) Work on pending art projects (pending for the last 3 years)
8) Figure out how to get out of here for good

Ok. So far I have managed to start on the first two and I have only been here for 3 days. The reason project #2 is so important is that I come from a family of pack rats and people who buy tons of everything. It's embarrassing but despite living in Seattle for the last two years, I have a dresser here full of clothes. It's not entirely my fault. My mom and grandma love to buy me things that end up just sitting around because I love to buy myself things as well. It's not just clothes either. It's old Jane magazines, National Geographics, mail, various business cards, and even old old cheesy jewelry that I thought was awesome at 12 years of age. (these are the fake silver moon necklaces with a diamond shaped long stone inside, or the choker with hearts and plastic roses dangling from it, ugh.)

Anyway all of this has got to go. It's insanity. Surely a costume shop would be happy to have my prom dress which was an 1800s style bar wench outfit. Maybe a vintage store would want my goth high school graduation dress with unbelievable lace detail? My mom doesn't like this project because she thinks that you never know when you could use the stuff again. Well ok. She has a point. The bar wench dress made it to two Halloween parties and the goth dress was worn in the adult life a number of times. It does actually look quite elegant if you are not wearing liquid eyeliner. Whatever. Enough is enough.

Yesterday and today I spent hours pouring over old stuff. It was surprisingly depressing. I thought it would feel like a relief to see things go but every stupid thing was connected to some memory; mostly difficult ones.

I had two drawers filled with old T-shirts. Well who gets rid of T-shirts right? I found my Gogol Bordello T-shirt, Flogging Molly, Maximo Park, Pixies, Reverend Horton Heat, Plaid, etc. Isn't that cute? Well I tried a few on and they were....
Uh.
Too tight.

Ouch. I'm still not sure of where they will go exactly but I don't like the idea of keeping things around that you think you will fit into again someday. That was exactly what was in the other two drawers. I tried stuff on today and watched buttons unbutton a moment after I put it on. I couldn't bring some pants together at all at the waist. God it was depressing. Most of that stuff I wore when I was a waitress at Dave's Italian Kitchen. I looked at the tag on a little black dress that wouldn't zip and was shocked. 6. Size 6. That's right. I was a 6 back then. A six!!!

I've never had a whole lot of body issues. Like practically everyone I wish that I was smaller but I'm not obsessed. I'm an 8 now and have been happy with that for some time. Right now it's on the larger side of an 8 and I might be pushing it but I go up and down 5-10 pounds all the time. Big deal. I try not to dwell. Sometimes it bugs me a lot and sometimes, like today I have crackers with brie for lunch and steak for dinner. Fuck it.

Frankly I grew up a ballerina but had the body of a salsa dancer even at 11. My ballet teacher used to tell me that I was fat and had a big butt. She would always make me feel bad but I totally didn't understand what a diet was back then anyway. I'm pretty sure that I was just curvier and doughier than the rest. That and my family fed me pierogies and nutella sandwiches all the time. What they hell did they care about saturated fat and carbs? I was a kid. They wanted me to eat and be healthy. Who wouldn't be a chubby kid in this household? I was active enough but even if there was a strict diet involved, I was never ever going to be a skinny girl.

A friend in Seattle took me to the ballet for my birthday this year and one of my first thoughts was that those skinny bitches up there just don't eat. Well of course I know all athletes eat they just don't eat like I do or have the same body type. I had a roommate once tell me that I could have been a petite supermodel if I lost 50 pounds. Yeah. I would have been dead but apparently famous.

Anyway I went on a very serious health kick around 2005-2006 and worked with a personal trainer for a few months. I was finally the size 6 I had wanted to be for years. I took classes at Bally's called "Pain in the Butt," and walked around like a duck for weeks. On days that I didn't lift weights I went to yoga. I was at the gym at 7 am at least four times a week. I waited tables at night and found myself needing a reason for existence other than asking about meat sauce or marinara. Today I was looking at all those cute small waitress T-shirts and button downs that I used to wear and I genuinely felt sad.

Ok I know this is somewhat ridiculous. I have a million things that fit me now so who cares about all this old crap right? It's there to make me feel bad for not keeping up with the hard work it is to maintain that 6. Well besides that I felt something else. Regret. I was with someone back then that never bothered to mention how cute I looked in those outfits, or what a nice job I was doing with the work outs. He had lost interest in me but pretended to love me and be attracted to me for a long time after the size 6 breakthrough. I wanted to be thinner and sexier and none of it mattered one bit to the person I thought it would matter to most. What a waste! What was I doing then when someone else could have appreciated the hard work and the healthier change? Maybe I could have dated someone then that also went to a gym or did something other than watch The Simpsons?
I don't even know if anyone noticed it. Come to think of it, dieting and working out regularly is so hard for most people that I try to be as supportive as possible when I know friends are going for it. It is SO HARD!!!!! The lifestyle change it took for me to get to that 6 was annoying and difficult and painful and exhausting. I have to tell you that no one at the restaurant or any of my friends ever bothered to say, "Hey you look really good," or anything to notice my efforts and the new me. In fact after buying new jeans in the 6 I went to work and told some girls about it. One of them said flatly, "You are not a 6." I was taken aback and said that I was a 6 now, so she just repeated herself. I felt humiliated but pretended her comment didn't bother me and said, "Well that is what the tag says anyway." I remembered that moment today and for the first time ever I realized that while I try to be a modest person, all that interaction came down to was a word that begins in jea and ends in sy.

And so all of those super cute shirts and mini skirts and dresses and short shorts and pants and bikinis from the size 6 days went into garbage bags today, and goodwill tomorrow. I hope some skinnier bitch will enjoy them.
Posted by Aviva O'Byrne at 10:11 PM 1 comment: