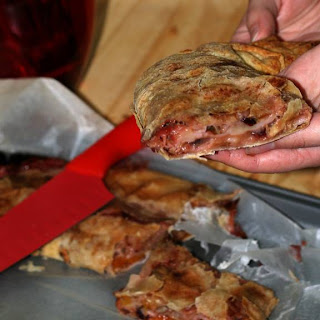 I was challenged to make strudel. So I did.
Posted by Aviva O'Byrne at 10:57 PM 1 comment:

Today M had his wisdom teeth removed. I stayed with him throughout everything and I must say that I panicked a little.
I'm squeamish. I would like it if I wasn't squeamish but I am. I don't deal well with blood and heart monitors and tubing and people wearing scrubs.
I didn't sleep at all last night and so I drank coffee so that I could be on top of things when he got out of surgery. Wow I am an idiot sometimes, really. Instead of being alert and focused I became jittery and freaked out. I couldn't even read the article in National Geographic that interested me. I wanted to pace or strike up a conversation with someone else waiting in the room. The receptionist humored me a bit but she had to answer calls and I was left to my own worries. They had some gorgeous fish in a saltwater tank so I watched them intensely.
When he was in recovery I had to keep him awake. It would be funny for some people due to the eyes continuing to roll back into the head and the groggy incomprehensible responses, but I was so nervous that I ended up talking to him about food. That was brilliant. It was noon, he hadn't eaten a thing and we didn't prepare properly for this and had nothing ready at his place. I was freaked out. I kept saying "Eyes on me!" every time he drifted off and it really scared me because it was what my 6th grade math teacher used to say to control the class. She was awful. I managed to have some brain cells left as I did promise that we will watch basketball and Batman later. A smile.
The nurse explained that I had to change the gauze, pick up the pain prescription, feed him something cold, give him medicine, and make sure he sleeps. Oh and don't forget the icepack. We didn't have ice packs and we didn't make the jello yet. Oh and the gauze can't be removed until it's full and he needs to gargle with salt water tomorrow. Sure!
A cab was called for us and the cab driver was annoyed because supposedly he had been waiting downstairs for a long time. When I told him how short of a ride we were going to have he rolled his eyes and was very annoyed. What an asshole. A man gets pushed towards a cab in a wheelchair and is helped inside and he is angry because we have a short ride. You know what? I'm an asshole too because I over-tipped him just to make him feel bad for being rude to me. Ha ha.
M was angry that we took a cab and felt it was totally unnecessary. He felt that we should have walked and that he was a little wobbly but he could have done it. I explained to him that we had to take a cab because if he fell I wasn't going to be able to pick him up. Men.
He grabbed his keys from me and I watched his inability to walk a straight line just to the door of his apartment with slight amusement.
Still now that he was finally home and on the couch I needed to get drugs and food for him. Wait a second, do I take the gauze out now? No I would wait until I had food for him. I should be back in 20 minutes.
Nope. It was more like an hour. Maybe longer. The pharmacy took forever and then I realized just how many groceries he needed. He might be out of it for a couple days. My heart was beating unusually fast as I scrambled to get all of this done. I picked up ice cream, sorbet, cottage cheese, soup, pasta, yogurt, apple sauce, pudding and a bunch of stuff for me in case I am over here being nurse for a couple days.
I was gone too long. When I got in there was blood on his face and in the sink. He was starting to feel pain and feel nauseous. The gauze should have come out much sooner. I had to take it out and give him pudding right away. It wasn't easy. Blood makes me very very very very nervous.
Gauze and then blood and then clean up and then pudding and apple sauce no wait he needs water and the pills and wait maybe it was too early for pills but he said it was hurting and he was hungry but nauseous does he have any paper towels he couldn't stand up by himself I was having a gmail chat but the typing woke him up i needed to be quiet but I should call my mom because she would calm me down and tell me what a wonderful person I am he was cold and needed a blanket but i thought it was hot in here and eew i can see the bandage where the IV was and he told me not to wig out but I'm good at taking care of people aren't I did I forget to buy fruit wait he doesn't have a blender who doesn't have a blender ok ok ok dishes I need to do the dishes the pain killer wasn't working so I called the dentist surgeon guy and he said that for a guy that size he should have taken 2 pills at a time instead of just one well why didn't he put that on the fucking prescription fucking asshole all of a sudden peace and sleep.
I ate a gigantic bowl of ice cream and managed to take a nap. Enter enormous stomach ache #2.
Posted by Aviva O'Byrne at 8:36 PM No comments:

I can't do it. I can't eat fast food. It's always a horrendous debilitating stomach ache and I just don't understand it.
Most people I know can handle the occasional candy bar or Taco Bell run but I can't. Fried food and grease is always a nightmare and this is really sad for someone who loves onion rings to death. I do allow for them occasionally but I have to split an order with someone or I will be very sorry later.
Sunday I was feeling great. My day started off beautifully. The weather in Seattle was perfect and I made my way to an early yoga class. After yoga I took a nice walk and ended up at a street festival going on near my neighborhood. It seemed like I should eat something at this fair so I went for a seemingly harmless chicken burrito. It was good and filling which was nice after the exercise. I sat down at a cafe for a while after and read.
Then I started to feel.....weird. Dizzy. Nauseous. Sweaty. Almost too full. Was it the caffeine? The grease? Was it heartburn? I needed to lie down. I would have liked to walk more and enjoy the day but instead realized that I had to get myself home as soon as possible. I was walking rather fast when my shoe caught something. I got my balance back for a second but then my knee gave out and I fell rather badly onto my left hip.
Well great! How many people just fall on the sidewalk in a crowded area? It's one thing to fall or trip once in a while but my god. There were a lot of people around me and several inside a restaurant facing the sidewalk. Thanks gods of Seattle! I appreciate it. Besides the fall I was holding a small cup of water which I managed to hold on to, but the water landed all over me. Beautiful day indeed.
I got home and went to sleep for hours. I woke up with the biggest stomach ache I have had in a long time. I took Mylanta for the pain to no avail.
What is it that does this? I've heard that MSG has these types of affects on people. I know that grease can make people sluggish and cause indigestion but what is it? I see people eating the greasiest food on the planet with no problem. Why does it affect me in this way? People say it's because I'm not used to eating fast food, but how does a body get used to it in the first place? How do some people have that so called "stomach of steel," and is that really a good thing anyway?
The stomach ache lasted until last night. I couldn't sleep at all the last two nights.
When I was in high school I was diagnosed with an ulcer. It runs in my family to have problems with the stomach but I found that a lot of them were stress related. I figured that if I stay relatively healthy I shouldn't have days like this anymore.
Sometimes it just comes for you I guess. Like sickness of any sort and days when you embarrass yourself it could just be your own body trying to get you to slow down. Nature has its way of making you stop and reconsider future burritos at street fairs and fruit in third world countries.
By that logic, maybe nature was trying to get me to buy a new pair of shoes too.
Posted by Aviva O'Byrne at 6:51 PM No comments:

This weekend I was in bed SICK. It seems like the gods are against me as it was a particularly beautiful weekend in Seattle and I spent it in bed and on the couch.

Here are my top Sicky Recipes:

2) Chicken soup: I like Mrs. Grass because it tastes amazing for soup in a box and who wants to make anything from scratch when you can't breathe?

4) Steam your head: boil a huge pot of water and put your face over the steam with a towel over your head

5) Tea with slices of lemon and cookies in dip in.

6) Eating as many grapefruits, tangerines, and oranges as possible

7) Sleep all day and when awake, watch The Simpsons.

I think I might have to buy a Neti pot to help with the breathing today. If you have suggestions for this sicky I'm all ears.
Posted by Aviva O'Byrne at 8:19 AM No comments: